When Your People Are Hurting: Part I

In the summer of 1999, I was living in New York and pursuing the beginnings of a dream career. That same summer, a magnitude 7.7 earthquake jilted my home country of Taiwan. It was big enough to rattle the neighboring county to the epicenter, where both my mother and my father’s families are from.

My family and I had moved to the United States many years prior, but we still visited every one or two years; my favorite aunt lives there; I have never quite been able to extricate the image of my maternal grandparents’ house, the big house in the country, built around a lush central courtyard, from the thought of “home.” (It makes a major appearance in my novel, published 38 long years after we left.)

At my paternal grandparents’ house in the city, I learned to use chopsticks and never forgot the cool cement floor, nor the rosewood bureau at which I sat and opened every lotion bottle of my grandmother’s, smelling what it was like to be grown-up. In the front of the building, where it met the street, was my father’s surgery. Then there was a small courtyard, and then there was my grandparents’ house. We could hear murmurs of street noise, and I could go through the surgery and around the corner to the breakfast bar. When I very young, I did such things.

But when the earthquake hit, I was far away from both of those places. Later, I’d find out that the great front hall of the country house had collapsed. The house would never have the same facade, although the family salvaged as much as it could, and the local university’s architectural department came by to study the pieces and the construction of the place. The city house, farther from the epicenter, seemed to be okay.

All our people were safe. The dogs who live at the country house and guard its many courtyards and connecting pathways must have made horrible racket, that night.

It is genuinely awful to be so far away and not be near when these things happen.

A decade later, a typhoon struck Taiwan, and this time, I was better equipped: I’d just passed the rigorous training required to become a member of the ShelterBox Response Team, and we were deployed to help with emergency shelter. We did what we could, in as rapid fashion as we could, and I was able to come home feeling like maybe I had done something.

Two years later, tornados made their destructive ways through Missouri and Oklahoma, and we got a phone call from the leadership of a Rotary district in Arkansas. Arkansas, they said, had been completely overlooked in the national relief effort. Could we come have a look? We went, me from New York and another teammate flying the even shorter distance from his home in Austin, Texas. 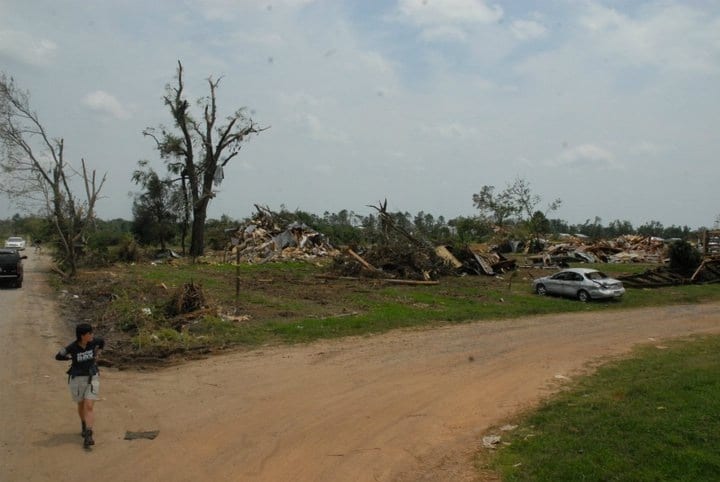 Today is the Tuesday after Hurricane Harvey made landfall in Texas. The same team member who went with me to Arkansas is keeping a close eye on the relief situation as it develops down there, along with another team member based out of Dallas. If all the pieces come together to spell out a story in which our aid is needed, the team will begin the task of deploying aid and helping families.

There’s something unique about responding to a disaster in which people just like you are suffering. When you land on the ground, you speak the same language; the landmarks look familiar to you; you understand the customs and the people. It is a uniquely heartbreaking experience.

And yet–and yet. We should all want for such a time, when we can do good by the people closest to us, by the people who share our cultures and our aspirations. We should all aspire to be ready to loan a hand where we can, especially in those places we frequent, among the people in our neighborhoods.

A friend once wrote that she was delighted to have been able to participate fully in the jury duty process: She was selected to serve on a jury, and got to see the trial all the way through. She came away, she said, enlightened, grateful to have had the opportunity to serve.

Service can be like this. It can be leveraged on us by our state, or we can choose it for ourselves. But sometimes, it lands smack on your doorstep, and then you can’t help but answer its insistent ring. Today, I’m thinking of my teammates, and how close this disaster is to them, and how glad I am that they are there to answer the calls of the people who need them.

Me and My Headshot

When Your People are Hurting: Part II