When I met him, I was a fairly good way through my short-lived freelance editorial career, and, arguably, at the peak of it. I was a contributing editor for Hooked on the Outdoors magazine, about a half-year away from getting hired on to work in advertising sales, and I was loving every minute of it.

It was early fall of 2000, and I pitched a story to the now-defunct Hooked about the surfing scene in New Jersey. I called it “Surfing the Right Coast.” My editor John liked it enough that he sent me to cover it as a feature and assigned an up-and-coming photographer named Chris Hondros to cover it with me. Chris was already working with Getty at the time, and I picked him up just outside of his Varick street offices. He was in a sueded brown blazer, jeans, and loafers, and I thought, “Oh boy, is this guy going to be okay?”

Chris was more than okay. He scooted here and there, huge lenses strapped all over, and ended up taking some awesome photos of the surfing competition that was taking place. Perhaps most important to me, he took some beautiful portraits that, when they appeared on the thick glossy stock that Hooked used, popped from the page and pinned down the wistful, evocative feel of a surfing competition that would always remain on the outskirts of the surf scene no matter how many top competitors it turned out, and no matter how much environmentalism was at heart.

Fluffy stuff, for sure, especially when compared to the conflicts that Chris would eventually go on to cover. Chris also shot some photos of me later, for a short essay I wrote on my fear of sharks and the surfing lesson that took place the same day as the surf competition. Of course I’ll treasure those. I remember seeing them in the magazine and thinking to myself, “That looks just like me, and it’s exactly the way I’d want a photo of me in a magazine to appear.”

That was Chris, in a nutshell. He was a student of individuals, and he captured them exactly as they were doing or saying the things that were their very essences.

We became friends that day, and saw each other quite a few times after we’d filed the story.

Last night, while I was struggling to find some peace with the fact that Chris has essentially been murdered (he was hit by an RPG while covering the Libyan conflict), I remembered something else: Chris was present at my 26th birthday party at the Half King. It was, in part, such a memorable event because of the photos Chris took that night with my rinky dinky point-and-shoot film Kodak, a cheap model I picked up at Rite Aid in Queens. I took a lot of pictures that year, and I took that stupid camera wherever I went. Chris was one of the first to arrive, and I remember him picking it up and turning it over in his hand, twice, looking bemused.

After he was done inspecting it, he held the thing above his head and shot ten, twelve good photos of the party from above, and then he got up on a stool, kneeling, and shot some more. They were wonderful photographs. Chris wasn’t an event photographer by any means. But I do remember getting those photos back, and loving almost every single one of them.

Of course, he’s not in any of them. But then again, that wasn’t what he was about, was it?

Later that year, my then-boyfriend and I went to celebrate New Year’s with Chris and his friends. At the time, Chris was living smack in the middle of Times Square, on 43rd street. We went up to the roof to celebrate. It’s the best vantage point I ever have had of Times Square, and the closest I ever want to get to the heaving mass of humanity that is the NYE celebration there. I’ve often thought of how wonderful it was to spend NYE in Chris’ company, and I wrote the scene of that party into my first novel attempt later.

We saw each other after that, well into the new year (2001, it would have been). We spent not a few evenings at bars in each others’ company, slugging back beer and the occasional whiskey, I think, although I may have fabricated the whiskey part of it.

These are my scraps of memory then: a few time-stamped photographs; some e-mails lost in the ether; memories of his voice over the line and across a couple of bar tables, the friendly brown eyes and raised eyebrows–“Tell Uncle Chris about it,” coquettishly–the constantly scruffy face, and that damned jacket he wore when I first met him, the one that made an appearance everywhere, it seemed.

My memories are nowhere near the events and images that made him famous later on. You won’t find our little article on his web page; and he probably didn’t think of me much over the past few years, nor did I think of him all that much, except for when I came across his byline, which was, okay, frequent, and always with the thrill that he’d gone from what we did together to this life. Always there was a frisson of worry and a silent wish that he’d stay safe.

These are the things I remember. I am honored to have shared a byline with him. Happy he graced my life. Infinitely sad that he won’t be around for me to look up when I get a wild hair, dial the number that lived in my Rolodex for years, gathering dust. Maybe I’d hear the warm voice again.

He was a good man, a good friend, whenever I called. My work is better because of his work. Here is Chris’ web site. I hear he has a son, a 3-year-old. Maybe one day I will bring by the clips, show little Hondros the faces his father captured before he his work launched him onto the world stage as an important voice in conflict photography.

Or maybe I’ll just keep it to myself. For now, here are the pages of our work together. I will miss you, Chris. Thank you for sharing the byline.

UPDATE:
In lieu of flowers, the loved ones of Chris Hondros kindly request donations be made to The Chris Hondros Fund. This fund will provide scholarships for aspiring photojournalists and raise awareness of issues surrounding conflict photography.
The Chris Hondros Fund
c/o Christina Piaia
50 Bridge Street #414
Brooklyn, New York 11201 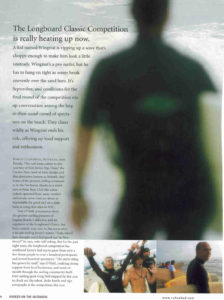 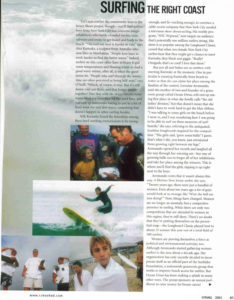