And now it’s almost the end of the January. It’s been a remarkably busy few weeks. While I’ve been gone from these pages, I’ve been very busy taking care of a little project I’m so proud of. Most of you have already heard me speak about this, but I’ll say it again: I think ShelterBox is the best thing that ever happened to me. Well, aside from Jim and Sprocket, anyway. And my friends. And, um, being born and stuff.

I was telling my brother, in somewhat of a dazed state after a ton of activity, that I finally understood what it meant to him that he was a Peace Corps volunteer. No matter what happens, no one can take that away from him. He walks taller because of it. When I am wearing the ShelterBox shirt or pin, I walk taller. I know that.

These past few days have been incredibly taxing. We’re literally in the middle of a huge earthquake that I think did even more damage than the 7.6-magnitude earthquake that leveled Taiwan. Haiti, which had no real infrastructure to begin with, is buried in rubble. ShelterBox is there helping, and we’ve got a ton of attention now because of it. Because our goods are so tangible and so easily trackable—do you see a big green box here? Yes? Well, that’s your money, at work—CNN is following a big shipment from Newquay until they get to their destination in Haiti. It’s my hope that they’ll follow the shipment until it gets delivered into the hands of the Haitians. Our tents are now being used as medical tents in a makeshift hospital, so that amputations and treatment can be carried out in more sanitary conditions than they have been previously.

It’s incredible, how fast we mobilized. As a result, I am completely knackered. Here’s the schedule since the earthquake happened:

Tuesday evening. Earthquake happens while I’m at a meeting with Adam Stone, publisher for the Examiner newspapers, for whom I’m doing some copy-editing.

Wednesday. I spend all morning and the early afternoon organizing efforts to get ShelterBox top of mind with Rotarians and tweeting about our efforts, just in case anyone else is watching. My girls at Rotaract of the UN spend some time organizing a fast happy hour, to take place on Monday. I send a quick note to a buddy at Pepsi who knows some folks who live in the city who might go to the fundraiser. I go out Wednesday night and drink too much, feeling a lot of pressure and not believing that such a horrible thing could happen to such a defenseless country. I get a note back from my buddy saying that his Haitian friends at Pepsi have taken an interest. The thing begins to take form.

Thursday. Our teams arrive at Port-au-Prince. I wake up hungover to an e-mail from Pepsi asking if I’m available for the next week to demonstrate the box at Pepsi headquarters. Jim calls to tell me that it’s actually going to be a whole week-long promotion, with bake sales, raffles, and presentations. I go to do a taping for the middle-school kids across the street. I get home to urgent requests for a conference, a phone conference at least, the next day, to arrange all the details for this promotion.

Friday. Conference at Pepsi. Interview for the Examiner’s Business of the Week feature. I get notice that the Westchester Tweetup Group is planning on making the following Thursday’s Tweetup a benefit for ShelterBox. I get a lot misty at the thought of so many people rallying around. I finish up my personal statement for an MFA application and send it in. One step closer to being done. I also file my story.

Saturday. I wake up to a tweet from a local green enthusiast who does cooking demonstrations with local ingredients at the Katonah Farmer’s Market. She wants to make one of her demonstrations a benefit for ShelterBox. We agree on the following week. I spend the rest of the day editing The Examiner. Jim and I head to a friend’s house in New Jersey for the evening—some good conversation and much-needed decompression occurs, although, as we’re walking the dogs on the beach, I’m taking phone calls, trying to arrange coverage for the Farmer’s Market.

Sunday. I can’t remember Sunday. At all. I only remember that Jim and I went to Aileen’s for BACON EXPLOSION. Have you ever had bacon explosion? It is a veghead’s nightmare. For me, pudgy little post-Ironman me, it’s not so good, but it was OH SO GOOD. Anyway. Oh, right, I also did a lot of editing on Sunday. 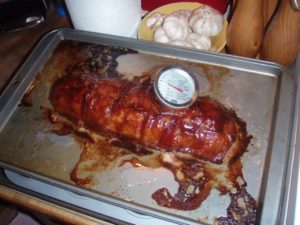 Monday. More editing. And a happy hour. Some long-lost friends came out. I was all verklempt to see such support. And really happy to hear that we’d raised enough money for a whole box. Awesome. All that from a $10 open bar and passing the bucket. Fricken awesome. We go to a sushi dinner with friends to celebrate.

Tuesday. Big, big day at Pepsi. People were in awe. I was in awe, as I am every time I unpack the tent. Probably the crowning achievement was hearing the cafeteria manager say that she and her crew were taking up collections to help Haiti and that we were going to be it for them. The chef came out. I almost cried. 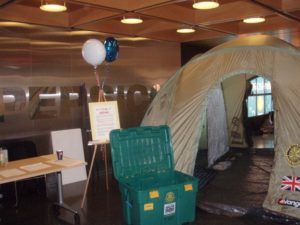 Wednesday. Big day at Pepsi R&D headquarters. Full presentation this time. Awesome to hear all the questions; great to see peoples’ faces again as they saw the tent. They did a raffle. The company matched. We had donations from $10 to $750 that day. I almost cried, again. I went home and struggled to pack and work on my critical essay. But I’ve been very disjointed lately. 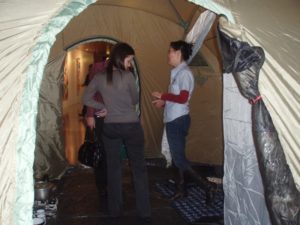 Thursday.  I’m away from my desk, of course, but still tied up in ShelterBox stuff. I have a feeling I’ll be tied up in it for quite some time, don’t you?