I’m reading Moby-Dick, so you don’t have to

…Actually, I think everyone should read Moby-Dick. That doesn’t mean I admire the thing, it just means I’m finding it intriguing. This is my second attempt at reading it; I last tried in 2015 and made it all the way to chapter 18 before I realized the whale wasn’t going to show up anytime soon. This time, I’m halfway through it. Moby-Dick himself still hasn’t shown up yet, but enough interesting stuff has happened that I thought I would share it with you. I don’t know that I’ll make it all the way through this time. It’s a testament to the book, I guess, that I remembered enough of it to continue on nearly four years later. Or maybe it’s a testament to the fact that nothing of real interest plot-wise has happened yet. As my Twitter friend @angryreporter put it: 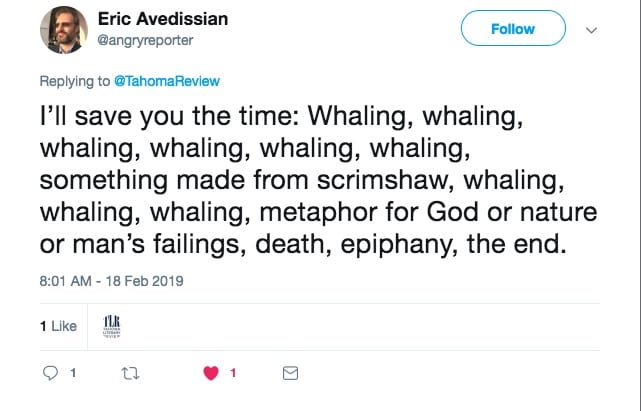 At any rate, here we are, 62% of the way through Moby-Dick. And here’s the link to my spreadsheet of my reading of Moby-Dick. Or, rather, so far of the things that made my ears go up. Let me know if it doesn’t work. Let me know what you think. Commenting is on. I’d especially be interested in hearing from those of you who have already read it.

Accountability in the disaster-relief world

My students want to read more, and it is a huge win for two reasons