I cannot think of anything worse for a blog than lying fallow. In fact, I cannot think of anything worse for a writer than not, um, writing. Anyway. Since I’ve let this go since December, perhaps best to effect a photo dump. We spent Christmas in California. We took a trip to Death Valley to scope out our wedding venue, which was gorgeous. Well, the outside was gorgeous, anyway. So we made a last-minute switch to take the whole event outdoors. We can only hope it doesn’t rain in February. Our little foursome (me, Jim, mom, and our cousin Joanna) drove up in the morning. A little technology lesson took place in the back seat.

And on the way back from inspecting the venue, we stopped at Zabriski point and took a quick couple of snaps. I like this one, but Death Valley is never the same in photos. 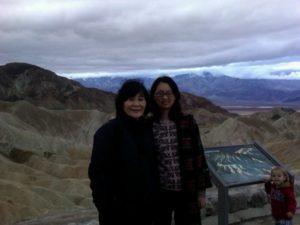 I like the little dude in the lower right hand corner of the photo. We went to Vegas, because Joanna had never been, and stayed for a night at the Bellagio. It was a very nice evening, although we were flat-out bushed when we got back. The next morning we went for a look at the Bellagio Christmas display, which was…um, big. And bright. And animatronic. 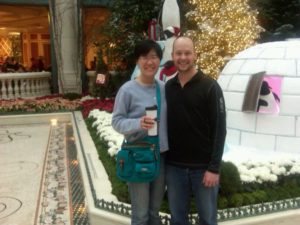 The penguin opened and closed its window hatch. Cute! Back in Claremont again we spent a fair amount of time in the Village, where we spotted this lovely cactus garden:

And this fascinating pudgy little baby bulldog, who would not sit still long enough for me to take a decent photo. From the top was easiest. 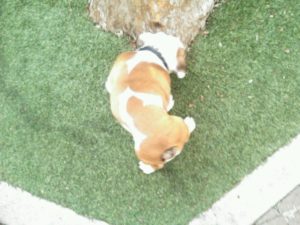 Christmas itself was a hoot. Can you spot the two immediately related people in the photo below? Hint: They’re making the same hand signal!! 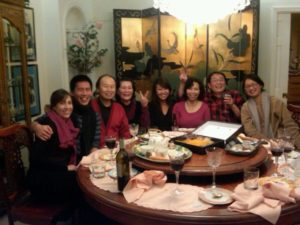 We also spent a day on the beach with our cousin Richard. Fun! 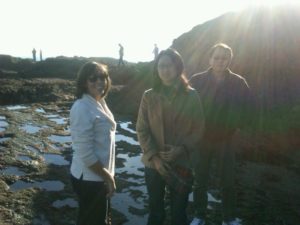 Then it was a quick jaunt back to the East Coast to see friends for New Year’s, and then back to the West Coast again for school at Whidbey. We stayed at the Captain Whidbey Inn. Lovely! 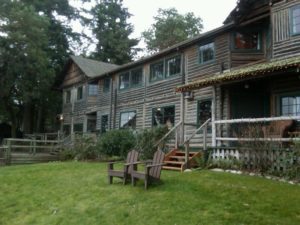 There was a lot of learning. We did some exercises that caused big breakthroughs. This is one of them: Our professor, the lovely and talented Carmen Bernier-Grand, had us make comics out of our narratives. I didn’t know where mine was going until I did my comic. It was quite a relevation. Here are the comics of the four students in our class. 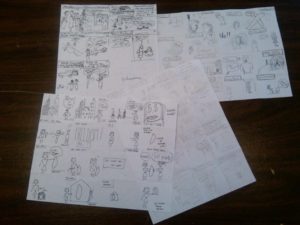 This is the view from the porch of me and Cyn’s cabin. We didn’t got outside a whole lot, but spent every morning, as usual, sitting on the sofa and chatting and having coffee. Next semester we’re in a house with our good friends Steve, Stefon, and Robert. 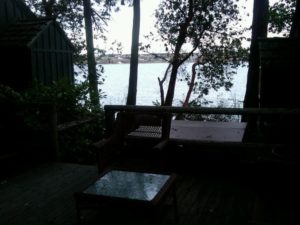 This is Penn Cove. 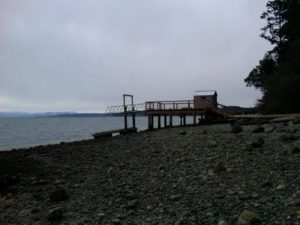 And this is Mt. Baker, which you can see from the front lawn of the Captain Whidbey. 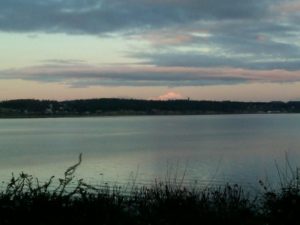 This is Steve and Cyn at Toby’s bar and grill. Steve’s fingers are very, very greasy. Cyn is listening intently to whatever Robert is saying. 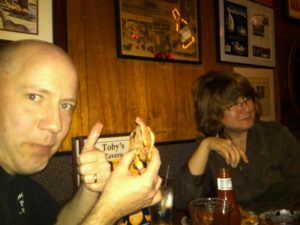 I love this photo of Cyn and Robert. This was our last night at residency. Always a little bittersweet. 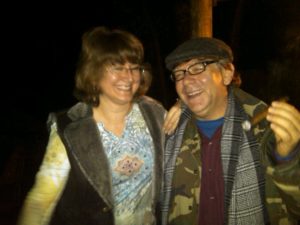 Robert, lighting up a cigar. 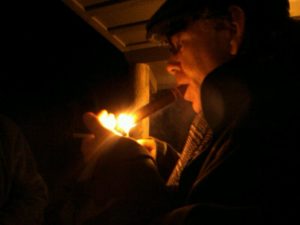 This is the fishing hut at the Captain Whidbey. 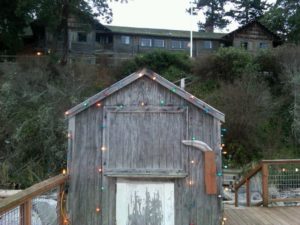 On the way back to the airport, we met our friends Meron and Rebecca from last residency. Wonderful. It’s pretty remarkable that we’ve actually made friends with these people we only knew for nine and five days, respectively. Good stuff. 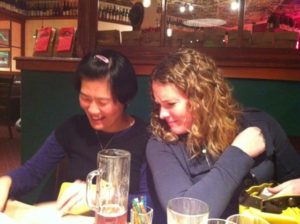 And what else? What else? I got back about a week ago and have been totally nuts since then. There have been so many preparations to make! We had friends over Sunday night for the big Steelers and Packers games, and guess what. We’re getting married on the day the Packers go to the SuperBowl. I don’t have very high hopes of Jim paying very much attention to what’s happening at the ceremony!

His co-workers had this to say: 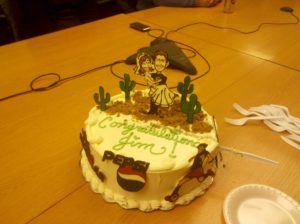 Although the groom has hair and the bride is clearly not Asian, the soccer player has a knee bandage on, there’s an Ironman logo on it someplace, and there’s also a Gatorade logo on it. I think his co-workers like him. 🙂

More later. Off to Vegas next Tuesday to meet Lara. Definitely have a bunch of stuff on my mind, but have been way too busy to put it all down! The writing, though–the writing must take more of a priority.

The People in My Neighborhood: The Track Rats