No, it’s because of the cover, which shows a white girl. 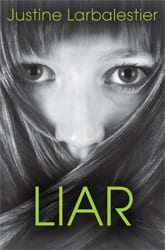 Bloomsbury, Larbalestier’s publisher, is quoted here as saying something to the effect of, well, the girl’s a liar. You’re going to believe her about her own race? (Justine’s side of the story is here. If you’re not familiar with what I’m talking about, I suggest you take some time and read her very thoughtful post.)

I haven’t read the book (it’s not out until September in the U.S., and I don’t have an advance reading copy). But I must confess to having spent several hours thinking about this from several different perspectives.

I have a specific problem with seeing movies that are based on books before I’ve read the book. If I didn’t know that a book was based on a movie, I tend to quarantine myself until I’ve read the book, so that I don’t end up with too many pre-arranged images in my head. I feel sorry for those who equate Harry Potter with Daniel Radcliffe, and not with the angel-faced boy that Mary GrandPre dreamed up. I feel equally sorry for everyone who equates Ralph Fiennes with The English Patient, or mistakenly thinks the Czech Republic looks anything like France (“Les Miserables” movie, 1998) . The point is, of course, that when you go to pick up a book, you get to draw your own conclusions about what people look like, what the landscape looks like.

In this case, Bloomsbury runs the risk of screwing with the backbone of the book. The readers were presumably intended to draw our own opinions about whether Micah’s compulsive lying extends to a matter as basic as her identity, her race. Visuals are a powerful thing, and with one photo, Bloomsbury has made the decision for us.

I wrote a review earlier on Christopher Paul Curtis’ Elijah of Buxton, and how cheated I felt to find that the big event that’s mentioned in the jacket copy actually has very little to do with the bulk of the book. If jacket copy can have such an effect, imagine how cheated readers will be to discover that one of this book’s questions is already answered for them, and without them even knowing it. I spent the bulk of Curtis’ book wondering if I had missed something, if “the big event” was metaphor for something else; if I was less of a reader than I thought I was. I wouldn’t be surprised if some readers comb through Larbalestier’s book after they’ve read it, looking for clues to Micah’s race that might betray the fact that she’s really white.

My parents have always said to me that I can’t forget that I’m an Asian , no matter what happens. You can imagine the kind of effect a statement like that has on a girl trying to fit in. My friends were white, my teachers were white, the pop culture all around me was white–my parents were effectively telling me that I’d always be different. More than once they’ve said that I might *want* to be an Asian kid, but I could forget about it–my black hair and slanted eyes would always give me away. (Later, as I took classes in such high-falutin’ subjects as “The American Dream,” I argued that being American was more a matter of style than substance. Yeah, that didn’t fly, so much.) They were trying to protect my heritage–I get that. But I am and always will be an American kid.

As I grew in my fiction, though, I noticed that I was de-colorizing my books, probably as a way of fighting back. The YA novel I mentioned yesterday is about a girl, just a girl, living in New York City. The middle-grade book is about a girl with a decidedly British bent. One of my downfalls is that I almost never physically describe my main characters. I think all of this is tied up in my hangup about being Asian. At any rate, the book I’m hitching my star to, my third WIP, is about an Asian woman living in New York. It addresses all of the things I’ve learned growing up in two cultures, and I think it’s a better book, a richer book, because of the distinct issues that only a person of color might encounter. My main character is stuck between two worlds, and that makes her struggle real, and a real American story.

I can’t imagine what would happen to my thought process if my future publishers saw fit to slap a white girl on the cover of my book. I mean, the book’s not about a white girl. Why would there be a white girl on the cover? It’s apparently a very real question. I’ve worked too hard to walk the fine line of being Asian American in my writing. I’m loathe to think that my publisher could take the work I’ve put into being an Asian American writer away from me.

My heart breaks for Justine–she’s worked so hard to craft a complicated personality, only to have one important pillar of that personality–its race–swept out from beneath her.

I try not to think so much about race. A friend of mine once said, in a college class I was taking with her on journalism, “My friends think of me as Holly first, and Asian last, or maybe never.” I’ve always had what she said floating around in my head–I think putting people into a box hampers what you can learn about them.

But my parents were right, to a degree: visuals are powerful, and, whether or not we like, we often make suppositions about people based on race. But I take very special exception to being called something I’m not.

Liar is not a book about a white girl.

And I am not good at math just because I’m Asian.

And Bloomsbury is not in the right here.

I’d be remiss if I didn’t mention the fact that Bloomsbury tested the cover, but without letting focus groups know what the book was about. It tested very well. Also, there’s been some discussion about whether covers with black kids on them sell as well as covers with white kids, and whether covers with illustrations or type (the Australian version of Liar is below) sell better than covers depicting people.

I don’t care about any of that. Bloomsbury’s cover doesn’t reflect the subject matter of the book, and this makes me mad.

I don’t even know how to end this post. I think I’ll go and read some Asian-American picture books.