Hey guys. Remember when we were back in school, or applying for our first jobs, and “self-motivation” was a thing? Like, it was a quality you touted during job interviews, and that your teachers may have called out on your report cards, maybe.

Most difficult things, in fact, seem to require external motivation.

I find myself up against two of these things lately. First, I’ve been more than lackadaisical when it comes to drafting my second novel. I’m super excited about it; I just … have other things to do. I find myself dragging my feet at the most idiotic things: it too me two and a half weeks to print out a piece of research, one of those that would allow me to draft the next few pages.

The second is relatively easy to solve. I just go back to what I know: Set aside time. Make it sacred, and a priority. And then set a goal. So I have a browser window open right now that’ll sign me up for a half-marathon in a couple months.

The first of these is a life-long problem when I don’t have a deadline. Writing things on-spec requires bucketloads of self-motivation. Oh, sure, there may be one or two days where I’ll crank out a thousand or even a couple thousand words, but then weeks–WEEKS!–can go by with no progress whatsoever.

So I fell back on an old standby: the thermometer chart. I made one for myself when I was drafting my first novel, and it worked like a charm. Here’s this year’s version, which takes into account a few things I didn’t need to address last time around. More on those later. 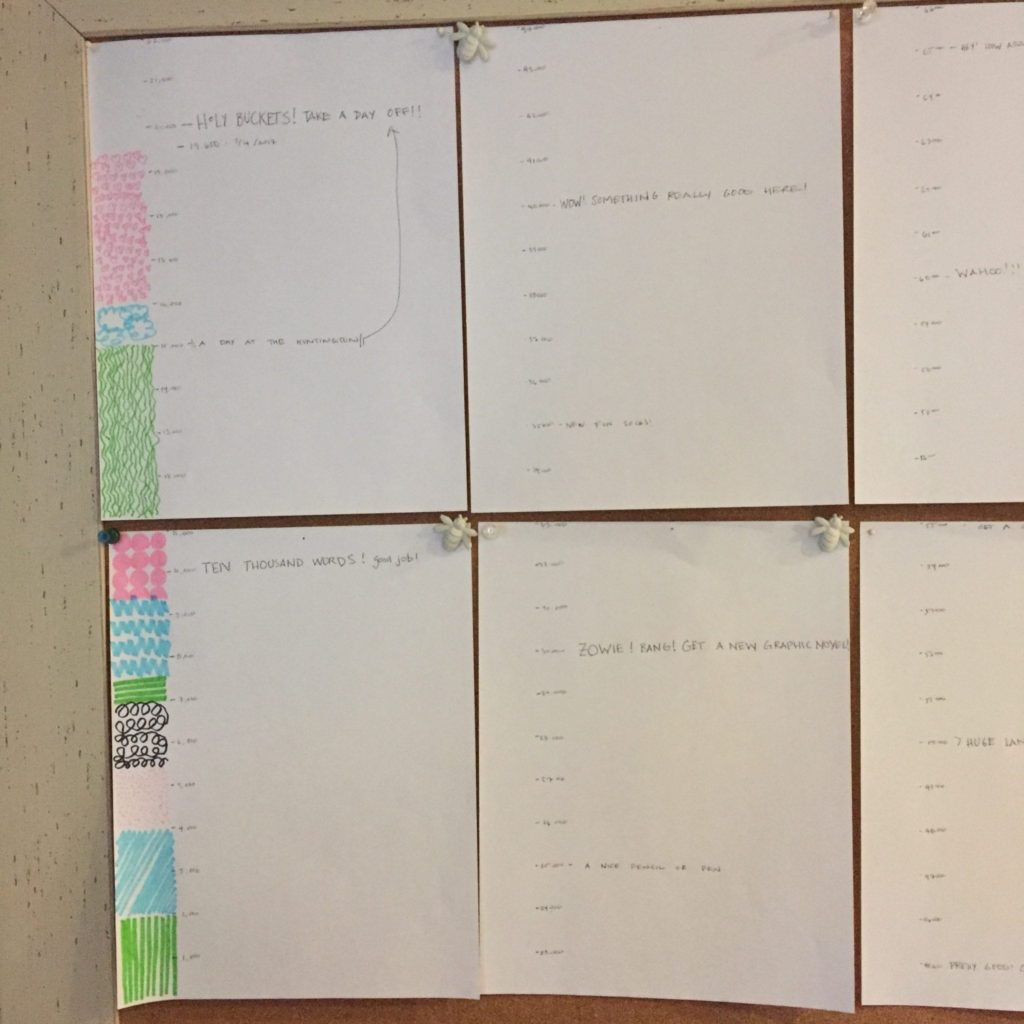 A lot of people, when I mention this chart, seem surprised or impressed. I’m surprised that more people aren’t doing this. It works like this: The increments are marked off each thousand words. And every five thousand words, there are little awards, like this. Sometimes they’re little: a new tube of lip balm; a new sheet of stickers. Sometimes they’re bigger, like a day at the aquarium. 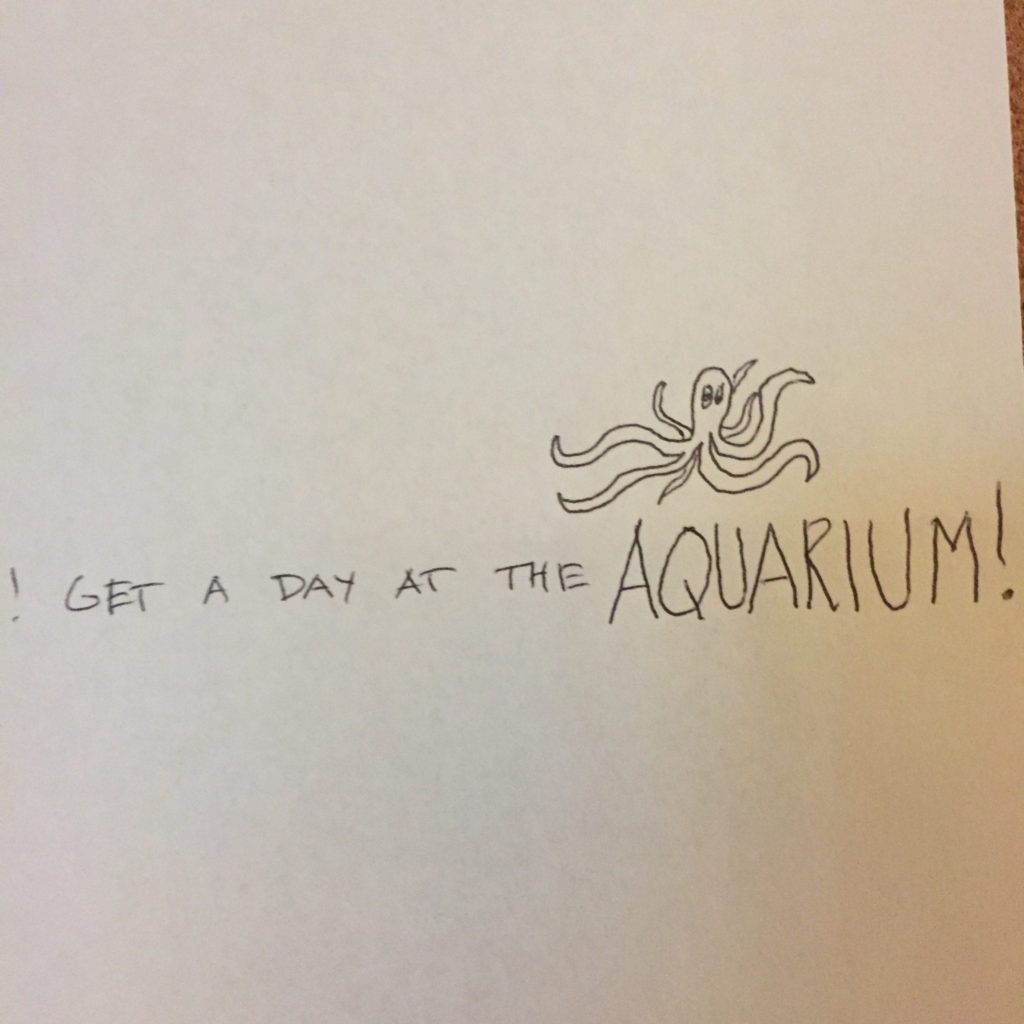 The progress is marked by colored bars, or doodles, on the left-hand side of the chart, like so: 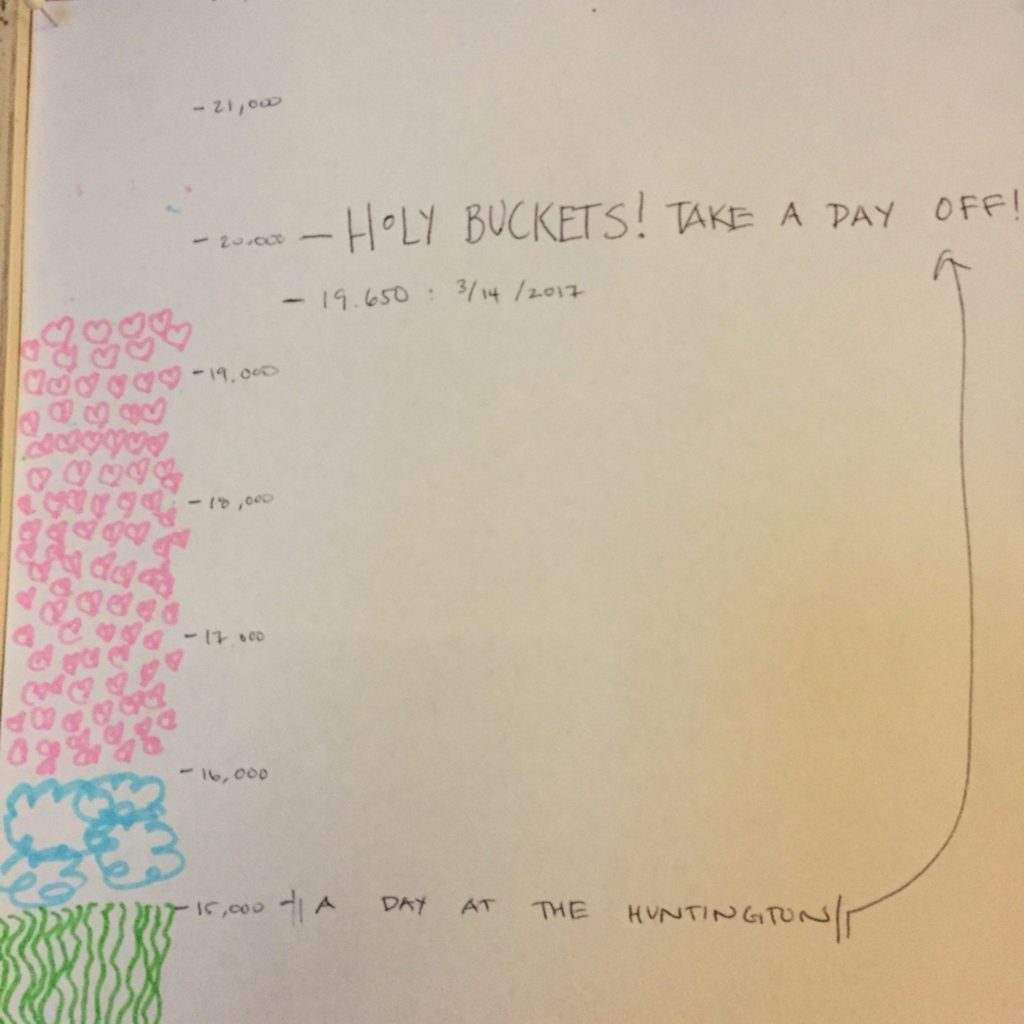 Now, this is a new chart, but an old project, so I’m already at 19,650 words. That’s actually way more than I thought I was at. But I’ll be starting to track progress daily from here.

I’m also planning on pulling the trigger on some accountability partners. You know, the people who e-mail you and say HEY YOU. WHAT DID YOU DO TODAY? Predictably, by the time today I get around to it, it will have been over a week since a friend emailed to say that she’d be interested in being my accountability partner. Which I feel bad about.

Actually, I think that’s probably the more efficient way to look at self-motivation. Do the shit you have to do so that you don’t feel bad about not doing it.

Anyway. Tell me about your, uh, self-motivators below. I’d be curious to hear what you do when you’re in a rut.