I spent a good amount of time last week editing obituaries for my day job. While such a task can feel honorary, part of the work made me sad. Not for the passing of the people, exactly–most of them were old and seemed to have lived full lives–but more for the way in which we commemorate the ones who have gone before.

Within the 21 obituaries I edited, I came across several mentions of service clubs and church activities. There was talk of having contributed to community by service on housing associations. Several had served in the military. One talked about a lifelong passion for planes (the obit itself was airplane-themed, tying the deceased’s birth to Lucky Lindy’s flight one year before across the Atlantic). Every single one of them mentioned work. Only two or three mentioned the deceased’s personality, and that, I think, is what really had me wondering: What’s our real legacy in this life? In the end, should we be aiming more for the types of notes we left in each other’s yearbooks senior year–“You were always nice to me”–than a list of accolades, which we won’t be able to enjoy in the afterlife, and which our descendants and loved ones will only be able to keep under glass and look at in the years after our passing?

Last week, my book turned 1. Originally, this was going to be a post about the things I learned over the course of the year. I think now I’ll save that for another post–soon, I promise–and talk to you instead about a guy I knew in college, a writer named Gerald McDermott. To save you from going to Wikipedia, I’ll briefly tell you these facts: He wrote and illustrated children’s books, and he also made some short films.

He was also my first real brush with the world of publishing. He came to speak at my alma mater. I don’t remember what he talked about, exactly–I think it was about mythology, since he was an expert in that–and he also read his Caldecott-winning book _Arrow to the Sun_ to us. 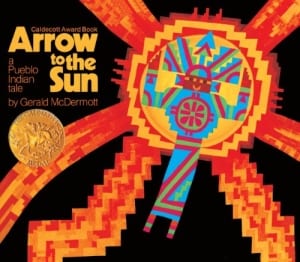 The most important fact of all is that he was generous. He was kind, and keen to help someone like me, who was interested in book publishing. We had a few e-mail exchanges after he came to talk, even after graduation, and he always was responsive. He made me feel like I could get to that world if I wanted to. In the end, I didn’t go into children’s publishing or picture books, and I think our last exchange may have been–gosh, not long after I moved to New York, I guess, so three years or so after I met him. A long time ago.

At any rate, I still remember his openness. The fact that he was so willing to help. I didn’t know or understand the Caldecott Medal when we met, but now that I know he won it years ago and was a close friend of Joseph Campbell, I am stunned that he had the time to exchange missives with a dopey college student who didn’t know any better than to not bother someone of his…time constraint.

Anyway, the day my book turned 1, I got a wild hair to write to Mr. McDermott again and tell him that I’d actually made something of myself in publishing. I think I owe some of my policy on helping new writers to him, although I didn’t really think of the connection until last Saturday.

We have the Internet now, so I didn’t have to go rooting through my desk drawers in my parents’ house looking for his business card. (I’m sure it’s still there somewhere.) I was super excited to write to him. I don’t know if I really cared whether or not he replied. I guess I just wanted him to know that he had made a difference.

I don’t think I know how to rightly express to you what a crusher this was.

Gerald McDermott was a Nice Guy. He was interested in everything, and even when approached by bright-eyed, bushy-tailed college students who asked if they could be his intern right there on the spot, was unflappable. He answered all the questions and made every single one seem worth asking. He let people down gently, or maybe they were too obtuse to know otherwise, but this is about Gerald.

Gerald thought in big, bold lines and bright colors. His commitment of legends and myths to paper and film made them accessible to probably tens of thousands of people who would have never otherwise known about them. He was one of those rare storytellers who could make the most basic child’s lament come true: “I wish I could see this story in real life.” Lo, Gerald could make that happen.

Gerald had very friendly eyes. He had great laugh lines and crow’s feet, and a good beard. His e-mail style was exclamatory, happy to hear from you, even if there was never a single exclamation point.

This is what you need to know.*

Here is something else I would like you to know: If you met someone a long time ago and they made a difference, don’t wait. Send them an email, a piece of fan mail, ping them on their facebook page. Do this not because I’m sure every author/actor/whatever would love to hear from you. Do this because, if the goal of life is to make it through with no regrets (as I get older, I think this is a pretty good one), you don’t want to be stymied by something as idiotic as “Gee, I never wrote to them to tell them how great I think they are. What a wasted opportunity.”

Who would you like to write to? Why not do it, today? I don’t mean the famous types, either, guys. I mean, the people you just like, the ones who are famous to YOU. Go on. Pick up the phone. Drop a postcard. You won’t be sorry.

P.S. The guy who owns GeraldMcDermott.com now recognizes the former owner of the site by archiving McDermott’s old site on his server. I think this is such a nice gesture.

*Some of you may know that the selection of McDermott’s book as a winner, and his interpretation of the tales he retold, were under scrutiny. This post isn’t about that, but you can read up on it here, if you like. It’s a worthwhile discussion to have.