…No, not really. My little cousin Adrianna is here this week. It’s her first time in New York. I do love showing folks around this place.
Her first full day here, we went down into the city at a reasonably late hour and met Larry for lunch. His office is in one of my favorite buildings in New York, The Chrysler building. It was so nice to see it again, and have an excuse to ride the elevators, and be in all that Art Deco glory. Clearly Adrianna was less enthralled than I was–I mean, most people would be.
Larry loves his family’s family’s history. He’s taken the extra step of letting folks in on it, which is how we got to hear about his grandfather, who lost a leg in the war and spent the rest of his life as a model for war and post-war efforts. This is Larry with a blowup of one of those ads.


After a quick lunch, Adri and I wandered up to see the U.N., where it was too hot to take photos and I once again admired the architecture (are you getting the idea that this tour is more about me than my guest?) and then we walked over to Fifth Avenue and down it for a skosh before hopping into a cab to meet Anna at Penn Station.
From there we walked down to Chelsea, admiring things in shop windows and searching for frozen yogurt, and then I took them to Brooklyn Industries and we took a bus over to Chelsea Piers for a terrific boat cruise around the lower end of Manhattan, almost up the other side to the Queensboro bridge. I didn’t know this until we got there, but it’s run by the same company that did me and Jim’s goodbye party from New York in 2005 and a Girls’ Night Out event. Love, love, love them.
Here is a nice photo of Adri, me, and Anna.

Adrianna was a little seasick. Evidence is here, in this photo, and the ensuing six others, that she took of various sights from exactly this viewpoint.

From there we walked down the West Side Highway to get to the High Line Park, which was something I’d wanted to show Adrianna anyway, and then we walked over to meet Jim and Denise for dinner at the very nicely appointed Safran. Here’s a photo of Anna and Adri at the High Line.

I just loved this park. I was sorry to have missed the Renegade Cabaret, a thing started by a woman whose apartment overlooked the High Line in its abandoned glory for just about ever. When she realized that people could actually see into her apartment, right up to the laundry she was hanging on her balcony, she invited a friend over, a singer, to belt out a couple of tunes. You only get the tunes if her party lanterns are hanging out. Alas, they were not out, and we did not get our evening concert at the cabaret.
On the way back to Grand Central from the restaurant, however, we did get to see two different musical acts. This one, in an abandoned clothing retailer , was particularly charming. In fact, the fact that we were separated from the music by the glass doors made it sound very ethereal. You had to put your ear to the crack to hear it, and there were several of us, whispering so that we could get the most out of it. 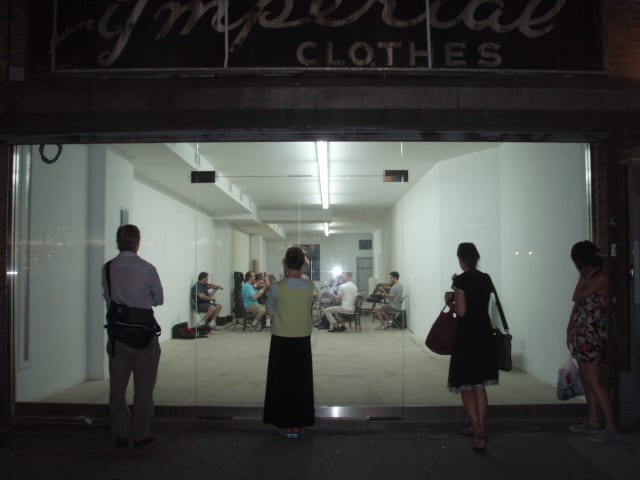 Adrianna was in town by herself yesterday with a classmate of hers, so today will be my second day with her. We’re getting a nice tour of the American Museum of Natural History for an old high-school mate of mine, who’s a librarian there, so we’re both looking forward to that. And then, after dinner with said pal, we’re off to a singer-songwriter friend‘s birthday party. Yay!
Adrianna American Museum of Natural History Anna Cynthia Lin friends happy Hudson River Sail-Nyc.com