I still remember the first time I ever saw Aileen outside of our usual haunts. We were both on the Upper West Side. She had a plastic carrier bag in one hand and was standing in front of a plate-glass window looking at some clothing items. The shop was Clothingline, when they used to have a brick-and-mortar, and I remember standing just near her, wondering if it was the same girl that…

Yep, it was. We exchanged hellos, and then some random platitudes. I can’t remember when we started hanging out after that, or if we actually did. I do know that when we did actually start shooting the shit together, it was in ways that were so far removed from the way we actually met that you might consider it lucky that we met at all.

So enough dancing around the shrubbery–how did we actually meet?

Answer: On bikes, both strong as can be, both confident, both just discovering, I think, what kind of a person extreme competency makes you.

Aileen and I met in 1997, during training for the 1997 Boston-New York AIDS Ride. I did it with my then-boyfriend, who lived in Boston. I was living in New York, and I trained for the thing largely in my living room, on a hydraulic trainer. But I did go on one or two training rides, and it was there that I met Aileen. We would both go on to complete the 1998 AIDS Ride together. Aileen would ride in support of an AIDS Vaccine across Alaska later, and I would ride across Montana in support of the same cause the year following. 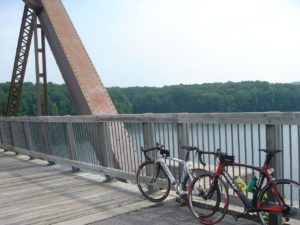 Like I say, I’d never seen her in anything other than spandex before the day I saw her standing in front of Clothingline, but I do remember thinking that this woman of bright smile and open demeanor was one to keep track of.

We floated in and out of each others’ lives for years; and then we lost track of each other. Later, we floated back into each others’ orbits, and have known each other through a fair number of birthdays. I have spent two New Years with Aileen. One was a year in the height of my social life, when I had to hit five New Year’s parties, dragging along a boyfriend who wasn’t too keen on all of the shuffling. It was just before Aileen moved to Colorado.

Aileen was, at the time, the coolest person in my immediate circle. She was the quintessential New York girl, the one I wanted to be, with a terrific apartment in Hell’s Kitchen, two cats, her bike stored neatly away. She had a bar at which everyone knew her name. She knew the firemen and the guys who rode Harleys; her hairstylist was her best friend; she introduced me to lots of different people. She played the guitar. Her friends were vastly different from her. She picked up and moved to Colorado, a couple years after I was considering, and eventually not ready to, move to Montana.

Later, she would be a rock in what might be the absolute most confusing time in my life. But I had no way of knowing this. In fact, Aileen has been there through the Married Man, the Cocaine Addict, the Ego-Maniac, and countless friend rotations. (Why do we give our ex-boyfriends capitalized nicknames, but not our ex-friends? Maybe I should start. Well, there’s Dead-to-Me, but that’s about it…)

I also didn’t know, at the time, that Aileen can write. And if now I am eternally frustrated that she doesn’t do more with her writing, I also know that our relationship is indicative of the way I’d like to approach life, and my fragile wish that more of the world will eventually know Aileen’s writing: what’s meant to be eventually will be.

Aileen’s bike is in a corner now, and has been for a little while. It’s a lovely hat-rack. But it’s kept free of dust, and Aileen knows it’s a beautiful machine. She also knows that she’d like to get back on it. Wouldn’t it be nice if, one day, Aileen and I got to ride our bicycles again together? 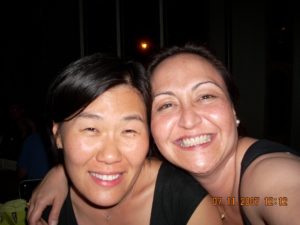