This weekend I spent some time working through my closet and dresser. Both are jammed full of items I was sure I didn’t use very often–life has changed a lot in the past few years and I’m a bit of a packrat, especially when it comes to clothing. So I went through both and set aside a stack to Freecycle and a stack to eBay, and was left, at the end of it, feeling very tired and pretty drained.

I think this is because going though all that clothing was a lot like going through pieces-parts of my life. It wasn’t until relatively recently (1996?) that I started to like clothing and figure out what worked for me, so going through clothing is like watching my life move before my eyes. Giving it away is a little bit like giving away pieces-parts.

Here’s what’s in someone else’s hands, or floating on the Interwebs, as we speak: 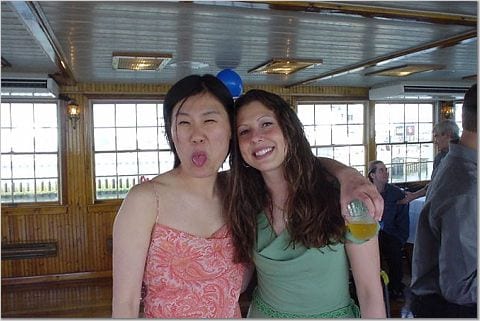 I wore this dress exactly once and bought it something like eight years ago. Originally, I purchased it for a friend of mine’s 60th birthday (we were all asked to wear pink to underscore an inside joke) and ended up going with another outfit instead. I wore this instead to a friend of ours’ 30th birthday. This is the first time Jim and I had ever been to a party together where we both knew the person being celebrated. And this is the very first time I ever saw my girl Anna in something other than spandex or sweats. Obviously, me and Anna’s relationship has changed quite a bit since then, veering more towards the above than anything in spandex. 🙂

I’m not sure what possessed me to buy a suit in bright red, but it worked for me. It was definitely a power suit of sorts, even if I did look a little bit like a realtor–or Nancy Reagan, eurgh. If I still fit into this suit (when I bought it I was at my trimmest, a svelte 128 and neurotic), I’d perhaps dress it up with something other than the black tank top I usually wore it with, but back then, it was enough to be busy all the time, working, effectively, two jobs–one for a not-for-profit and the other for a career I wasn’t sure I wanted–and living a crazed social life. Life was fun, outrageous, and more than a little uncertain and inelegant. Life then was a lot like this suit.

So. This is interesting, this one. This is probably the most recent acquisition to go (2006?). First of all, it shrank in the wash. 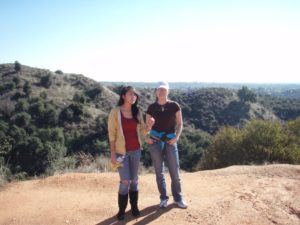 See? It is teeny tiny on me (I’m on the right). Second, the time I bought the shirt, I must have been feeling very aggressive: On the front of this tee it says, “Jog and die.” At the back hip it says “yes it hurts.” I like the sentiment of this tee, but the reality is, although I’ve been heard swearing profusely on race courses in the past, that was all for show, some kind of sick need to be heard exerting myself. (I bet I was a grunter in the gym, too.) I’m not an uber-aggressive athlete, and on the days that I do feel aggressive, I tend more to seethe quietly on the inside and be internally annoyed at either myself or competitors. I’ve found, for me, that swearing does help, but swearing quietly helps more. It’s what I’ve settled on, and I don’t need to shout about it as much as I used to. So–out it went.

Every girl needs a little black dress. Somehow, I settled on this one for my 25th birthday. It cost me an arm and a leg at the time, but I loved it, and it was by far the most daring–and, at the same time, classically shaped–item of clothing I owned. The thing is 32.5 inches from top of shoulder strap to end of hemline. 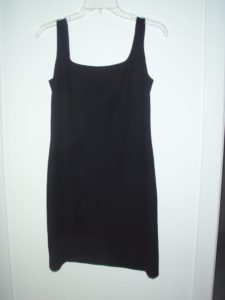 There are no photos of me wearing this thing. Probably for the better. 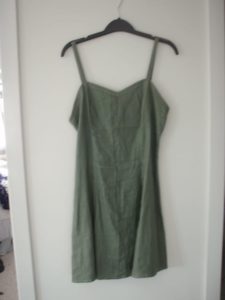 Sweetheart neckline, nice lichen-green color. I purchased this dress in Boston, I think, on my very first real job. (I guess by “real” I mean it was out of state and my mom didn’t get it for me.) I was an intern at the Atlantic Monthly and had free rein to purchase what I wanted to, since I was also working at a $5.75-an-hour job at Brookstone in Copley Center. It was a great summer. I had a terrific time, and came home with items like this and a long-distance boyfriend. It was a little bit big in the bust and a little short in the leg, and I only wore it twice. Also, I was a bit of a chunky monkey back then. Anyway, I think, after years of wearing boyish plaid or struggling to find something that really worked for me, I went a little girly-nuts in the opposite direction. (As I recall, I also came home with a pair of vegan Mary-Janes.) The last time I wore this dress was out on a picnic with friends with Lincoln Park after a trip to the zoo in 2007. The best thing about this dress? There’s enough material in the skirt that you can sit cross-legged and not expose the world to your undies. I will miss this dress when it goes. If it doesn’t go, well…I’ll probably wear it again. 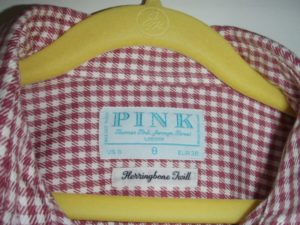 Another item from the working days. Each of the four years I worked in a high-paying job in the city I went out and purchased two Thomas Pink shirts. I went for the trimmest fit, since I had by then figured out what my body shape was and liked it, and was just getting into colors. I favored narrow button plackets and deep or French cuffs. My first pair of cufflinks was based on a Frank Lloyd Wright design and made from sterling silver. They were like a talisman. The year I left my job, I lost them. Anyway, I was introduced to Pink by an ex-boyfriend, a guy whose parents were Old New York and who Knew About Such Things. I bought this when Pink still made their shirts in Great Britain (they’ve since moved their production to Myanmar, or summat), and so I don’t buy them any more. Anyhow. An era gone. I’m not sad to see this shirt go; I never much liked it, and a good friend of mine once asked if I was going to a hoe-down when I saw him for lunch in it. Sigh.