HOW does one acquire so many fabulous, varied, tangible and intangible things in the space of one weekend, you ask? The answer is simple: FAT TIRE NARNIA. What *is* Fat Tire Narnia?
Well. Let’s just say that it involves mountain bikes and the never-ending search for good places to ride. Yes, yes, I know I said, particularly after Isabella was stolen, that I really didn’t know if I was going back to mountain biking. i’d invested what I saw as a fair amount of time and never really gotten any better at it, after all. But then, see, Friday afternoon, we crossed the border into Massachusetts, and the leaves were gorgeous and crunchy, and somewhere deep in my physical memory there was a buried a sense of woods, trails, and the curious, fragrant crunch that occurs when you fall off your bike into a pile of soft, welcoming leaves. There was speed, and crisp, cool air, and the joy that comes from being out on your bike in the woods in the deep of the fall. It’s different from riding in the summer, you know. Anyway. Jim and I pulled into Colin and Carli’s house in the early afternoon, and we mucked about Melrose for a bit, getting to know the town. Chris came in later that evening, to a nice seafood dinner at Turner‘s and some nice local microbrews to boot, and then we all called it a night.
The next morning, after some faffing about buying groceries and getting fueled up with coffee and whatnot, we packed our cars and headed off to East Burke, Vermont, home of Kingdom Trails, only to get stuck in a lot of leaf-peeping traffic.
Here is proof of the pretty foliage. 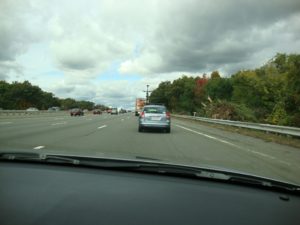 There are no pictures of awful leaf-peepers or the traffic they caused, ‘cos there were’t any when I took this photo. That’s ‘cos I figured out too late that the white screen my camera was showing was indicative of a smashed LCD, rendering my camera useless. So I pointed it around and took random photos of leaves, but it didn’t much feel right (my camera doesn’t have a viewfinder).
I took a bunch more like this: 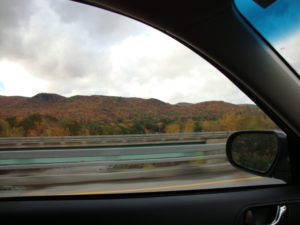 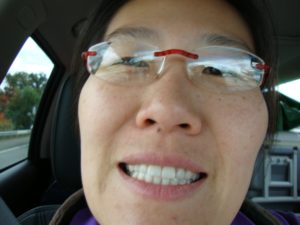 and then gave up. Sigh. Too bad, because there were some really good times that weekend. Good thing Boyd had a video camera, and Colin is an inveterate shutterbug.
Anyhow, we pulled into East Burke, Vermont at around 3:30 that afternoon, just enough time for the guys to squeeze in a late-afternoon ride, and Carli and I packed up Lily (Colin and Carli’s gorgeous little 3-year-old girl) and Sprocket and went off to the campsite to set up camp, but not before I looked shiftily at the local bike shop and tried to talk myself out of buying a bike right then and there.
At camp, Carli and I encountered several problems: the campground was shaped like a circle with a couple of off-shoots that we didn’t see at first, making finding our site a small adventure; Sprocket kept on trying to explore the greater area; the hammock Colin had thrown into the car at the last minute turned out to be not-a-hammock, the ground was almost too soft, so on, so forth. By the time we got everything set up, it was time to meet the boys back in town for dinner.
I just about made up my mind to get a damned bike when all three boys came rolling across the street on their bikes, covered in mud, faces covered in shit-eating grins the likes of which I’ve never seen, not even on athletes crossing the finish line after a long race. Cos, see, finishing a race is still work. There’s a very different feeling to doing something that you’re just good at, something that doesn’t involve winning, that just involves being out with friends and riding to your skill level.
We ate at the local pub, finding some terrific beers on tap and discovering the crap service that exists in a small town that revolves exclusively around mountain bikers and locals, and then we went back to camp to experience the hell that is starting a fire in damp weather. 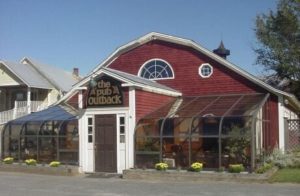 I put my Leatherman to good use (also, some handy skills that I picked up from watching Bear Grylls on TV–shut up), shaving wood into teeny tiny bits for tinder and then dumping the entire pile of shavings into the dirt just shy of the fire pit (blame too many micro-brews). At the end of the night, it fell to Jim to save the evening, since he apparently breathes sheer oxygen from his lungs, where the rest of us mere mortals exhale only a shallow mix of useless CO2 and other pointless gasses. At any rate, our dismal fire fell prey to the damp in the air and an eventual rain as we slept that night.

I woke up feeling groggy and snotty, but rallied enough to drag my arse up to the bathroom and brush my teeth. Sprocket came with me, hellbent on saying hello to whoever was in the bathroom stalls. Good thing mountain bikers have a good sense of humor. When I came back we’d decided on abandoning the oatmeal-in-a-camp-pan breakfast and settled on a hot breakfast somewhere in town, thereby putting me in striking distance of the bike shop again.
I wandered in with our friends, trying to stay casual, loose, but then I found a real steal, and, bolstered by four people who clearly weren’t going to let me out of there without a bike anyway, I walked out with a ride I really like, a new pair of shoes, pedals, and cleats, all for a nice price.
Carli and I left the boys for a ride while we drove Lily into the neighboring towns, hoping to get her to sleep, and then we went back to camp for lunch and then geared up for our own ride.
Colin, Chris, and Jim returned with predictable shit-eating grins again, and we suited up, left Sprocket and Lily with Colin, and proceeded on our own ride.
It was a sheer joy being back on the bike again. There’s nothing really unrideable, even for me, about the trails at Kingdom Trails, and I’m hoping that we’ll go again before the season’s out. I executed one stunning crash on a run that involved some banked berms and chose to peg-leg my way down the rest of the trail, but that’s OK–I’ll get better as time goes on.
The rest of the afternoon’s kind of a blur. Our time on the trails went by in a ridiculous flash, all woods, leaves, laughing, and Carli taking out a small defenseless tree, and then we headed off to dinner in a neighboring town and back to the campsite, where the fire lit successfully and we chatted into the night.
It was a terrific trip. There is something really cool about getting together with people you don’t really know, making that leap into friendship, committing yourself fully to an experiment, only to find a good match all around. Lots of laughs and automatic inside jokes, things that can’t be posted here because they won’t make sense to anyone else.
For Jim, I think it was an extra-sweet trip. We know only a select number of people who can keep up with him on a mountain bike, and while he always enjoys riding with me or our mutual friends, it’s not the same as actively pushing your partners–and being pushed–while still having a great time. Onward and forward, to the next Fat Tire Narnia.