Museums are my happy places. I visit them when I find a new city; I re-visit them when I go to cities I’ve been to before, too: I like to know what new things they are exhibiting, and maybe what they’d added to their permanent collections.

I also like talking to the museum guards. There are three that stand out in my head at the moment; at some point I would like to write them all down and maybe do a little chapbook of them.

Most recently, I was at the Phoenix Museum of Art.

I was in an exhibit of an artist I’d never heard of before, one Agnes Pelton. When I walked in there, I didn’t really know what to think: Her work is equal parts graphic design and fine art, and I couldn’t be sure if she had gained inspiration from the art of the era that was already around her, or if the wider art world took its cues from her. So I asked a museum guard.

“What do you think of this work?”

She was probably my age; standing straight, hands clasped behind her, and she looked alert. “Oh, I really like it,” she said.

“Oh? What about it do you like so much?”

Here she launched into an explanation that I won’t try and repeat to you verbatim, but the gist of it was that she thought the work was so clearly spiritual, and that it was ahead of its time.

I asked her which of the works displayed she liked the best, and she pointed out one that was a kind of landscape, but with a rectangular opening in the paint that looked out onto what was possibly a another lighter blue sky. “Look at that open door,” she said, or something like that. “Anyone can walk through it.”

I pointed at another one, this one.

“I like that one, too,” she said. “Everyone is their own little star.”

After another couple of exchanges, I thanked her for her time and did a slow lap around the paintings. When I got to “Orbits,” I saw that the curatorial note expressed the same sentiment of individuality. It was nice to think that the museum guard either had come to her own similar conclusion on seeing the painting, or that she had read the curatorial notes and they resonated with her.

When I was almost at the end of the exhibit, she came back to me. “You know,” she said, or something like it, “I think the best way to look at this art is to think that it has something for everyone. Whatever way you choose to look at it, that’s what it means to you.”

Obviously, I wasn’t recording her, or taking notes while I was talking to her. But I very much liked the sentiment of what she was saying, and while it’s obvious to those of us who have spent a lot of time looking at art, it was nice to hear it expressed from someone whose life is literally art, day in and day out.

Last year, I went to the National Portrait Gallery. I went to see the then-new Obama portraits, but I had a spin around the other galleries as well, and then I found this:

(This copy is on my bulletin board; it’s not framed that way in the gallery, dur.)

When I went to look at it, there was some kind of class in the gallery, staring at it. I asked the museum guard nearby what was happening. They all had pencils and paper out and were looking very serious while someone lectured and asked them questions, but they weren’t sketching it anything.

“Oh,” he said. “they’re discussing what it means.”

“Oh, they’ve got all kinds of answers. I keep raising my hand, but she doesn’t call on me.” He tilted his head towards them. “Notice anything about them?”

“The thing is,” he said, looking equal parts amused and disgusted, “they’ll never get it right. You can’t know unless you’re like us, stuck between two cultures.”

A great gleeful laugh nearly bubbled out of me at that point, but I can’t quite pin down why. Some kind of solidarity? Some kind of schadenfreude? I don’t know. It wasn’t my proudest moment. But I really appreciated the exchange.

Last week, I took my students to the Norton Simon museum, a little place in Pasadena. It’s one of my favorites, in part because it’s manageable, but also, I like the art in there. We were doing some exercises from Amy E. Herman’s seminar the Art of Perception, and her companion book, Visual Intelligence. We were looking for “The Repentant Magdalene” (Guido Cagnacci, 1660-1663).

I couldn’t remember where this painting was in the museum, so I asked a museum guard. He didn’t know, which was annoying, but then he came back to as we were on our way to the information desk. “Is it the one where she’s taking off all her jewelry?” he said, making brushing motions down each of his arms, as if he were shucking off bracelets, rings. “That’s it,” I said, but I didn’t remember the motion quite being depicted that way, and as you can see below, it isn’t that at all. It’s very much after the fact. 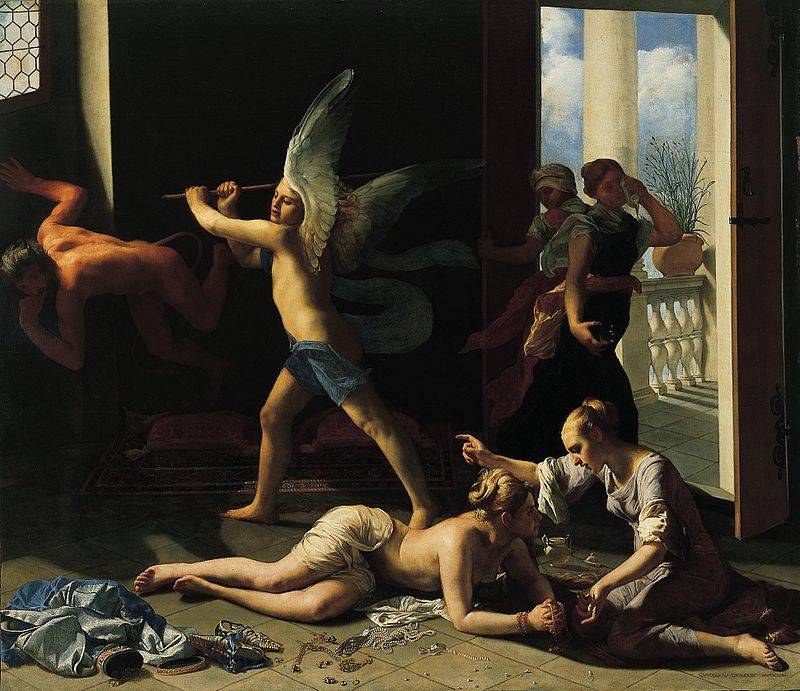 One of the things we were looking for as we were studying this painting is our sense of implicit bias, or unconscious bias. All of my students grew up in Catholic households, but none of them clocked that this was Mary of Magdalene. (I didn’t let them look at the curatorial notes or the names of the paintings.) Some suggested that the women in the background were coming to rescue the woman on the floor. I’d just finished editing a book by a stripper, so my immediate re (re re re-action, since I’ve seen this painting many times) was to double-check and make sure the angel wasn’t flogging the woman on the floor for being a terrible person. And, of course, I clocked her gorgeous footwear, because I’m a sucker for good shoes. (They’re in the bottom left-hand corner, and if you google the painting you’ll see I’m not the only one who’s noticed them.)

I loved my interaction with this particular museum guard because it showed what his memory of the painting is; what he felt was most important about it. The immediacy of the subjects’ actions; the “what happened” imparting such a sense of urgency to him…

Well, maybe I’m wrong. But still it was interesting to note.

They all have been. I think this is why I’ll always talk to museum guards, even if just to find out what they think of the art they have to work near, all the times. I’m still wondering if I’ll ever meet anyone who hates their job.