Sigh.
I do hate losing my mo. One of my favorite lines to trot out about having chosen writing as a career is that you can find inspiration in whatever you do or say. You wake up every day knowing that something is going to strike you as worthy. Everyone has something to offer you. It’s a very lucky thing, knowing that you’ve got that on your side. Inspiration’s not a problem. It’s motivation that’s the issue, motivation to get up and outside and look for inspiration. You don’t find it in a cubicle, although a good friend mentioned the other day that I am the type of person who would do better in a box, entirely closed up, if I am to really focus. Sigh.
Take today, for instance. We went to bed last night at a reasonable hour and I decided that this week was going to be the week that I get back to being physically fit. Yes, yes, I really have done nothing since Ironman. I did this jog on Monday:

and it took me FOREVER. I ran the loop six times, for a total mileage of 1.8 miles, and it took me 21 minutes. Argh. Speed isn’t really an issue–I’ve become quite pokey since I started distance training, and I’m okay with that–really, really–but what I was really struck by was how much my legs ached on Tuesday.
At any rate, I thought, OK, let’s just get back on the bandwagon, do cardio three days a week this week: Wednesday you’ll do the same loop six more times, maybe 7, do the same thing on Friday. By week two you should be working out six days a week, strength training on the days you don’t run.
Guess what? It’s Wednesday. I have not yet gone for my jog. Later, though, later.
The weekend was strange. Friday night I took Jim to Horsefeathers with Peggy, since he’d never been. We got home kind of late for my 5:15 wake-up call to get to the U.N. in time for U.N.-Rotary Day. It was a nice day representing ShelterBox, but I ran, as predicted, on all six cylinders that day and was totally wasted by the time I got home for dinner with Kate. Still, it was awesome to see her, and nicer still to have yet another friend in our home.
We didn’t take any photos with Kate (why not? why not? morons!), but I’ve been charged with a Flat Stanlina until after Thanksgiving, and she got her photo taken at the U.N.

Lucky girl.
I spent all over Sunday on the couch. Totally exhausted. It was a gorgeous day, and I read Wuthering Heights and watched the BBC film version, which was unexpectedly moving.
Anyway. So here I am, flabby and unexercised. In other news, though, I’m finally beginning to wrap my head around finishing my applications for the MFA programs I applied for (really, it’s just sending in manuscripts and essays and things), I wrote close to 3000 words yesterday for NaNoWriMo, I just found out my good friend Jody is going to be Chicago the same time I am over Thanksgiving, and I think I am *this* close to convincing my brother that he needs to come out early for Christmas so we can have some quality time before the holidays take over.
I think I might actually have most of my shopping & making-stuff (I do hate the word “crafting,” don’t you?) done, too, believe it or not. Most of it.
Here’s a gratuitous photo of the United Nations building. I’ve always loved this building. It’s due to be gutted, though, because it’s way out of honking code. Asbestos and everything.

I forgot: Flat Stanlina and I had coffee together. She ate most of my egg sandwich, the little so-and-so. 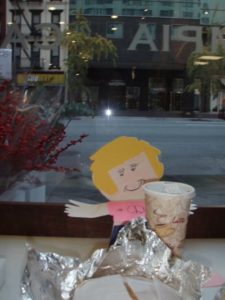 More writing now. Some exercising later. Bleh. I have a horrible hankering, by the way, to be back on Dartmoor. Wannh!