Almost at the bottom of my second cup of coffee. In accordance with my self-imposed rule of posting more than once a month on this thing, here’s a series of posts about the past week and the people in it. But really, it’s about the varied people in my life, and how they got there.

On Wednesday I went down to my friend Alan’s school, Bronx Science, to talk about ShelterBox. Alan and I have been trying to put this together for a long time. He managed to squeeze me into his Comparative Government class, all seniors, all two and a half weeks from graduating. 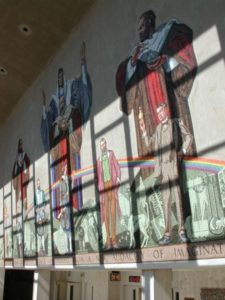 The awesome mural at the entrance of BxSci HS (photo: BXSci)

People, can I just say how incredible it is to watch a friend teach? Even if it’s just taking brief command of a class and then turning it over to you; there is something remarkably moving about the process of watching someone you know and love; someone who’s lived a long and storied life, part of which you’ve been there for; stand in front of a class of students who could be unruly, but aren’t, in his presence.

Alan’s students are thoughtful and kind; smart and curious; loving and giving. They are reflections of Alan. Anyone who’s ever doubted the influence teachers have on their charges should witness something like this.

Later Alan took me to lunch. We had mac and cheese in the school caf. I love school cafs. We were in the teacher’s cafeteria, but whatever: same food. I only wish there were fish sticks and tater tots. Alan looks unimpressed here. 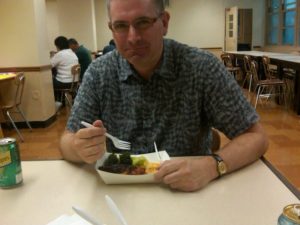 I, however, was impressed by the milk cartons: 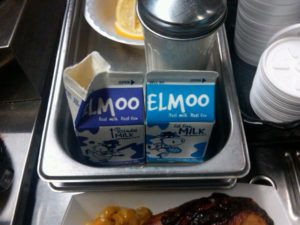 Would you like to know how Alan and I met? It is a classic New York story. It was early summer, 2001. Maybe even late spring. I was working in advertising sales, and living in Astoria, Queens.

I liked it there. On this particular late-spring day, I dashed down the subway stairs at 59th and Lex, eager to get home, and ran into a wall of people. This is always a bad sign; it means the trains are bogged down someplace and we will all get home a little later, after a sticky subway ride all the way back.

I breathed out, “Ugh,” and looked at the guy next to me, doing a crossword puzzle. “Wow. How long has it been like this?”

He looked up from his puzzle and shrugged. “Dunno. Just got here.”

I opened my book (Carl Hiasson, but I can’t remember which), and he went back to his crossword puzzle. Not long after, our train arrived, and I looked at him. “Not bad after all,” I said, and he nodded.

We got on the train and I promptly fell asleep, which I did often in those days. You get to knowing where your stop is and your body figures out pretty quickly how long you can nap for, but the crossword-puzzle guy had no way of knowing that. So he watched, nervous for me, as stop after stop went by and I slept.

At the last stop, he got up and reached for my foot to shake me awake, but I snapped awake just in time.

We walked out together, and he asked about the book I was reading. We made small talk until I got to my corner. He lived only a block beyond, and it seemed we’d been living in that small radius for the past two years or so.

But we ran into each other steadily for the next few days, weirdly enough, returning books and videos; picking up stuff; things like that.

We never once exchanged information, and then there came a stretch where I didn’t see him. And then came moving day.

I was moving into Manhattan, and I took the day off to do so. I tried to pack up and then, at around 10:30, realized that I still had dry-cleaning to pick up. I locked up my apartment one last time and went down the street. I turned the corner, and bumped right into Crossword-Puzzle-Carl-Hiasson-Book-Video-Library-Train guy.

“I’m moving today!” I squawked, or something like that.

“Okay, we have to do something about this,” I said, and finally, finally, we exchanged information.

We’ve been friends ever since. Alan was with me in the days after 9-11. He’s seen me through breakups and worse; several job changes; he’s been a constant shining star in my life.

I know his students feel the same. 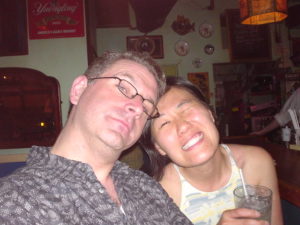 yes, the only photo i have of us together. so lame!